All That I Have Are These To Remember You

I just got back yesterday from a photography conference/convention/seminar that just overloaded my brain with so much information. I kid you not, we were listening to speakers from 9:30a to 12:30a with a break for lunch and a break for dinner. It was insane, but also entirely energizing and inspiring. I could list every speaker and tell you what I learned from them (I take nice, neat notes), but I want to focus on one. On the very last day of the conference, the very last speaker was David Williams, a photographer based out of Australia. Sure, he spoke about the business and about taking good photos, but that’s not the essence of what I came away with. David emphasized the importance of heirloom photography – photos of your friends and family. This covered a couple of different issues. One being that as photographers, we’re rarely in photos. If you’re the photographer in your family, don’t forget to step in front of the camera. It’s not a complete photo if you’re not in it. And one of the things I have to take to heart is that the people who love you don’t care what you look like, so don’t be afraid or self-conscious or ridiculous. HAVE YOUR PHOTO TAKEN! Another issue is that with digital, we tend to delete our memories if they’re not perfect. When you developed your rolls of film, very rarely did you ever throw a print out because someone looked silly. The best photos are the ones where all the kids are crying or where your little brother is picking his nose. Those are the ones that say family. So I encourage you, and myself, to go easier on the delete button and to PRINT UP THOSE PHOTOS!

Now, before this particular session began, I was warned that people often cry when they hear David Williams speak. I’m a total softy, but this seemed a little strange to me. However, I will admit that by the end of his nearly 4 hr talk, it was taking all my energy not to sob. I would have flown right by regular crying if I had let those tears past my eyelids. It was ugly. When everything is said and done, photos still remain. I know it sounds dramatic, but you never know when someone will be taken from you. David Williams kept asking us to close our eyes and think of our families and the people we loved. Then he would ask, “Do you have all the photos you want of them?” The answer always seemed to be no. My challenge to myself, and to you, is to take more photos. Be in photos. Print your photos. My one regret, something I can’t seem to shake, is that I didn’t take photos of my grandfather when he was dying. He was at home, always with family and friends around. There were such moments of tenderness. I have this memory of him, sitting up on the edge of the bed, with his back to me. My mother is rubbing his bare back, while my other aunts are buzzing around. I can still see the outline of his body, his posture. I never brought my camera because I believed my family would think it was too morbid, that injecting a camera into the situation would ruin something. In fact, writing this now, I worry about what my mother will think when she reads this. Hi mom. I can see the photo as a black and white, with emotional light and shadows. Maybe sharing this will hold the memory longer. All I know is that I learned to be better about taking photos of the people I love. This photo was taken of my grandmother and I on her 89th birthday. I took a lot of photos that day, and even made sure I was in some. My grandmother passed away only a few months later. These photos are priceless to me now. 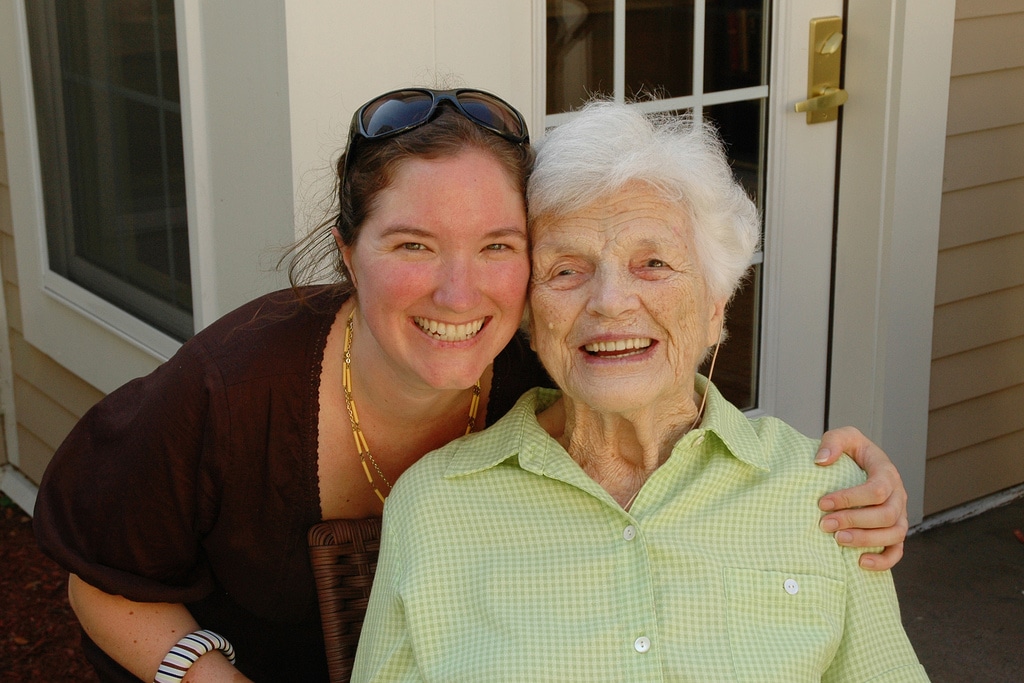 As a photographer, I constantly grapple with the decision of whether I should be taking photos or just be in the moment. I think every situation is different, and I know I drag my camera a lot of places and never take it out. All I know is that I’d rather have it on me if the opportunity presents itself than not.

So, to repeat. Here’s our New Year’s Resolution (and I’m talking to you): TAKE PHOTOS. BE IN PHOTOS. PRINT YOUR PHOTOS.